The Institute for Modeling Plasma, Atmospheres, and Cosmic Dust (IMPACT) houses a 3 MV linear electrostatic dust accelerator which is used for a variety of impact research activities as well as calibrating dust instruments for space applications. The dust accelerator is equipped with a 3 MV Pelletron generator capable of accelerating micron and submicron particles of various materials to velocities approaching 100 km/s.

The dust accelerator is available for use by outside groups, following approval from the Colorado accelerator team. To apply for accelerator beam time and to discuss usage costs, please fill out the application form (available below) and send it to one of the following contact personnel:

The application form can be found here.

A PDF containing accelerator information can be found here.

The current accelerator schedule can be found here. Note that while we try to keep this up to date, things change regularly. Please contact Tobin Munsat for the most up to date information especially for booking times.

The figure below illustrates the operation principle: the dust source is mounted onto the HV terminal of the Pelletron and individual charged dust particles are accelerated by the electrostatic field. A pair of pickup tube detectors is used to measure the velocity of each particle and the logic circuit of the Particle Selection Unit (PSU) selects the particles within a desired range of velocity and charge. The rest of the particles are deflected and do not reach the experimental chamber.

The entire system is oil-free and can be pumped down to the low 10-7 Torr range using a combination of turbomolecular pumps and cryopumps. All turbomolecular pumps are magnetically levitated to reduce vibrations, and all high-vacuum pumps are backed with oil-free forepumps. The laboratory also houses a separate, 20 kV "mini-accelerator" used to test various dust sources before installation into the main accelerator.

Dust particles with diameters ranging from 0.03 - 2 µm have been accelerated to velocities of 0.5 - 115 km/s. A detailed map of the distribution of launched dust particles is shown in the figure to the right.

An FPGA-based unit performs two functions, using the pickup-detector signals as inputs. First, it digitally filters the raw signals to detect particles with extremely low charge levels (on the order of 4000 electrons) within the background detector noise. Secondly, it acts as a "particle selection unit", which downselects a user-selectable sub-population of the launched dust. Users can downselect based on particle velocity, charge, or mass.

The shape of the dust beam is typically Gaussian with a characteristic width of ~6 mm.

The most common material in use at the accelerator is spherical iron particles, ranging in size from ~30 nm - 2 µm in diameter, and subsequently downselected as needed by the particle selection unit. Additional spherical metallic materials can also be used, though only a small variety have been tested so far. (It is expected that any spherical metallic particle can be launched, but they must be tested in the mini-accelerator before use).

Insulating particles such as silicates (olivine, SiO2, etc.) which have been coated with a very thin layer of platinum or conductive polymer (polypyrrole) can also be used, though use of coated silicates is typically reserved for more specialized applications.

Waveforms from each of the three pickup tube detectors are recorded with a 12-bit NI PXI-5124 unit running at 10-100 MSamp/s.

At the conclusion of an experimental run, users are provided with a data "package" which contains data on the launched particles, as follows:

IMPACT hosts a variety of target chambers that can be mounted at the end of the beam line.

The LEIL chamber is 1.22 m in diameter, 1.52 m long, and has a volume of 2 m3. An externally-controlled moving translation stage is installed in the chamber which allows control over the impact position in one dimensions (transverse to the beam line) without breaking vacuum. All ports are standard conflat, of various sizes, and a variety of different viewports and electrical feedthroughs are available.

IMPACT operates a dedicated chamber designed for experiments requiring ultra-high vacuum conditions (UHV). Equipped with a cryopump and baking system, this chamber can be directly connected to the accelerator and routinely reaches conditions in the 10^-10 torr range, with a demonstrated base pressure to date of 2 x 10^-10 torr. This chamber is appropriate for impact experiments requiring very clean conditions, exceptionally low background gas pressure, or both. To date it has been used to investigate neutral species released from hypervelocity dust impact.

The chamber is unusually large for a UHV system; the usable interior volume forms a cylinder approximately 60 cm in diameter by 70 cm tall. Mounting tabs are provided for large or heavy experiments. Large (8″ CF) flanges are provided for directly-mounted experiments or windows. Experiments requiring access to the lowest pressures in this system should be able to withstand at least a 100 C bakeout temperature.

The ice target chamber is designed for growing and maintaining ice targets in vacuum. The chamber can be easily moved and hooked to the dust accelerator. The ice target has an ice thickness monitoring system, a rotational stage for the ice system, and a linear time of flight mass spectrometer. The temperature of the ice mount can be varied down to 80K.

Housed at the Johnson Space Center, the gas gun can accelerate 5mm - 1µm sized particles to velocities that range from 3.5 - 7 km/s. Utilizing a wider range of projectiles, the gas gun provides complimentary experiments to DAL which supports the study of hypervelocity impacts.

ZAP, based in Boulder, has developed celestial simulants since 2006. Complete with a full design, engineering and research staff, ZAP is able to produce a variety of simulants including: Lunar Mare, Lunar Highlands and many custom 'synthetic' minerals. Due to the rarity of authentic celestial minerals, these simulants provide the necessary materials needed to conduct the many studies at IMPACT.

More information about ZAP can be found here. 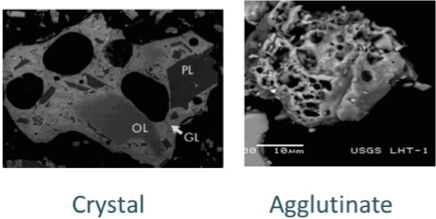 Housed at the Colorado School of Mines (CSM), the Center for Space Resources provides fully equipped laboratories containing a variety of vacuum chambers to assist in dusty-plamsa studies. Since 1998 CSR has participated in studies relating to dust mitigation on astronaut suits, habitats, and instrumentation as well as the development of various tools used to extract resources from the lunar surface. CSR has also participated in flight hardware design, assembly, testing, and remote operation of experiments on the Space Shuttle and the International Space Station. CSR is complimentary to DAL and DPL in exploring dusty plamsas.

More information about CSR can be found here.

Tech-X is a high-performance computing company that provides both professional high-energy and plasma physics simulations as well as technical support for use of their Vsim code. Vsim is a high-performance, 3-dimensional, Particle-In-Cell code and is IMPACT's flagship plasma modeling code used to explore the plasma environments around airless bodies and spacecraft.

More information about Tech-X can be found here.